If you're a fan of Jane Austen - and even if you're not - you probably know by now that this year marks the bicentenary of her death.

As a result, there are lots of special things going on to mark the occasion.

One of these is a new exhibition at the Bodleian Library in Oxford.  (It's actually at the Weston Library, the 'new' library across the road, but it's part of the Bodleian.) 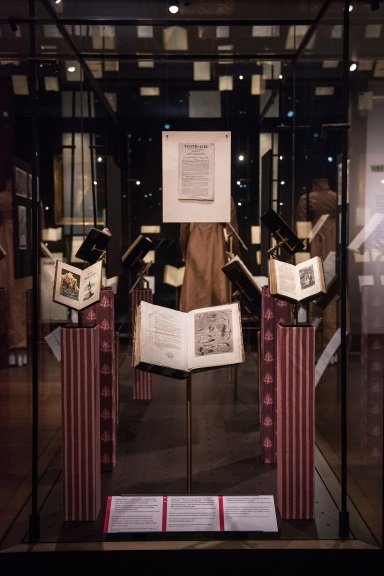 This exhibition collects together a number of items not displayed together before, which shows a different side to Jane - the astute business woman and  one who knows what's going on in the world.  (For those of you not well up on European history, Jane lived at the time of the French Revolution and Napoleon; Napoleon's plans to dominate Europe  caused the Napoleonic Wars, which included the battles of Trafalgar and Waterloo.)  Hence the title of the exhibition,  Which Jane Austen?

The exhibits, which are mostly letters and books, have come from a variety of sources, including Jane Austen's House at Chawton in Hampshire.  The staff there have found some snippets of fabric going back to Jane's time, so Georgian or Regency in design.  Dot Little, Art Director at the Bodleian, has used them to create repeating patterns so that new fabric could be printed.  Print me Pretty was very pleased to be asked to print these fabrics, which have been used to decorate the exhibition, adding an authentic touch to the decor. 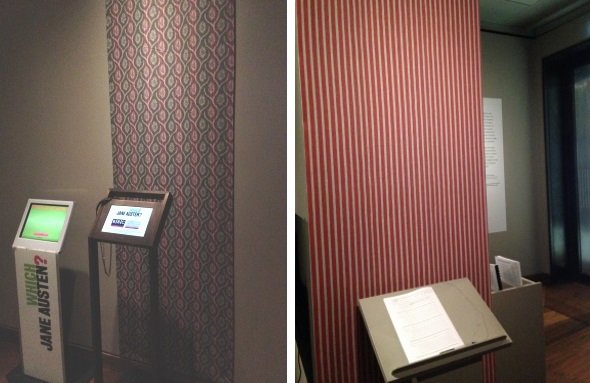 The lighting is kept low,  to protect the exhibits, so the photos are on the gloomy side.  In fact, there is a 'no photos' policy at the exhibition, at the request of some of the institutions loaning items.  However, I was allowed to take photos of the fabric in use, as long as none of the exhibits was shown.  In addition, I've been able to use a couple of photos taken on the opening night.  These are the two top photos; they are both taken by John Cairns, copyright Bodleian Libraries, University of Oxford.

The exhibition, open until 29th October, is fascinating, with lots of original documents, including letters in Jane's beautiful handwriting (even through the glass of a display cabinet, you can read a lot of it, which is more than can be said of her agent!), the home-made notebooks in which she wrote her books and a cheque for royalties.  The latter was made out to 'Miss J. Austin' by mistake, but she signed it with an 'i'!  That was of personal interest to me, because my grandmother was an Austin.

Two of the few non-paper exhibits are Jane's travelling writing desk and a 'pelisse', a copy of one of Jane's.  (You can just see it in the background in the top photo).  Apparently, it suggests that the wearer was about 5'6" tall and as thin as Kate Moss.  I was surprised how tall Jane was - I've always imagined her as being much shorter.

My husband isn't a great reader and has never read any Jane Austen, but he said the exhibition 'almost' made him want to read her books!  That's high praise from him!

One extra little touch at the end of the exhibition - clips from all the BBC dramatisations of Jane Austen's books being shown on a large screen.

Do go along to see the exhibition if you can (entry is free) and let me know what you think of it, and the fabric!