As I've said before, and as I'm sure you're aware, fashion is a strange thing.  The images we have in our minds of the fashion of past centuries are mostly the clothes worn by the wealthy.  Working men and women couldn't afford (and, at times, weren't allowed to wear!) the luxurious fabrics and extravagant styles worn by the Royal Court. Neither were such clothes even remotely practical.

Much the same still applies today.  Think about the catwalks of the big fashion weeks.  How many of the garments on display at these shows do we ever see in the street?   Street fashion does still follow the trends set by the big designers, but it's adapted for everyday use and  made from less expensive fabrics - and using mass-production methods.

Those of you who have been around a while may remember that we started looking at the fashions of the 20th century a good while ago.  We reached the 1970s last Spring, but have gone no further.  Part of the reason is the difficulty I've found in assessing a time that feels relatively recent to me, even if some of you weren't around then! And, being a part of it makes it more difficult to judge.

So, I've chickened out of looking at the 1980s and 1990s up to now.  But I'm going to have a go at looking at these two decades now.  Please feel free to tell me below if you think I've got it wrong!

Think of fashion in the 1980s and you have to think big - big shoulders, big glasses, big hair!  It was the era of Power Dressing for women and we all followed suit to some extent.

In many ways, Princess Diana epitomised the fashion of the decade - lots of frills, big skirts, big bows, big collars.

Looking at the photos now, many of the clothes just look too big for her, but that's how we wore clothes then.  Anybody else have an oversized t-shirt that was later relegated to a nightie? 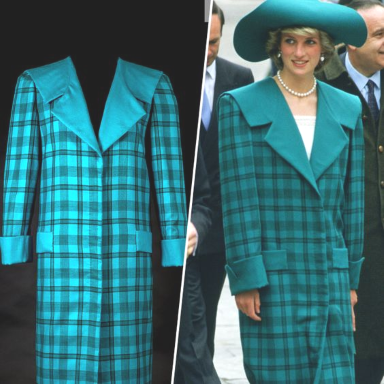 I'm sure colours were more vivid then than they have been recently!

Denim jeans were really becoming a staple of pretty much everyone's wardrobe.  Before, they were an item of clothing for the young, but as the teenagers grew up, they didn't discard their jeans.  People who were past their teens in the 70s were less likely to wear jeans, although some did.  But those who started wearing them have never stopped, so they're a universal uniform now.

It seems to me that, in many ways, fashion hasn't changed drastically since the 1980s or even 70s.  Details have changed, but the main types of clothing haven't changed all that much - and at the moment, pretty much anything goes! I've got a dress I made about 15 years ago, which I still wear occasionally.  It feels a bit long now (one of these days, I'll take it up!) but otherwise, it doesn't really look dated.

That makes it harder to judge the fashion markers of a particular decade.  But, during the 1990s, clothes went back to more reasonable dimensions.  The big collars etc. got much smaller.

One thing that stands out to me as a 1990s phenomenon is shell suits.  For those who weren't around then, a shell suit looks a bit like a track suit in style, but is made of lightweight nylon fabric.  Generally speaking, they came in much brighter colours than a tracksuit and were unisex.  I'm not sure why they disappeared, nearly as quickly as they appeared.  I thought they were quite nice as leisurewear, in itself a new trend around that time.  They were lightweight, compared with track suits and washed easily!  (My son had a couple, being of the right sort of age to enjoy wearing them.)

Another 1990s phenomenon was colour-change tee-shirts.   Like a lot of gimmicky things, they were all the rage, but a bit of a disappointment.  They stopped changing colour after a few washes.

Otherwise, I can't think of anything that really stands out as a 1990s fashion.  Can you?

That brings us to the end of the 20th century, decade by decade.  However, I have a couple of posts left which fit into this strand - swimwear in the middle of the century, and Mary Quant.  Look out for them, coming soon.