Last year, when my grandson was due to leave nursery, the mums of the leavers wanted to give something to the nursery to thank them.  They wanted it to be something for the nursery, because they are always short of money!

After talking to me, my daughter suggested a wall-hanging.  Apparently, they already had a number of wall-hangings which set the scene for the children's imaginative play and my daughter thought another hanging with a different type of scene would be nice.  The other mums agreed and the nursery staff suggested a woodland scene.

Over the next few weeks, all the children who were due to leave at the end of the summer term got involved in creating the wall-hanging. 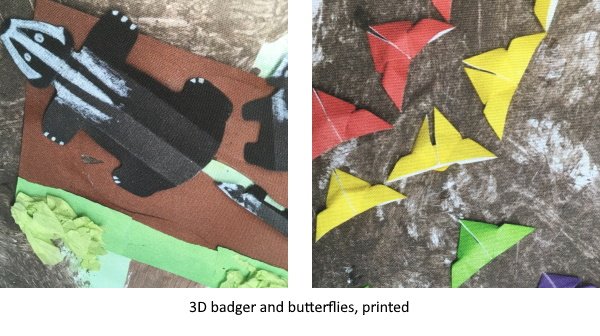 My daughter made a huge piece of paper by sticking rolls of wallpaper backing paper together and drew the outlines of the scene on it.  Then her two children painted a path from top to bottom of the sheet, using mud!  We were in lockdown at the time, so the other children couldn't get involved in that part of the process.  Instead, they all painted leaves (the large tree in the scene was covered in dozens of individual leaves!) , animals and other elements of the design, which my daughter then stuck in place.

Once the wall-hanging was finished, we needed to get it onto the computer.  This proved to be the most challenging and frustrating part of the whole enterprise.  My son-in-law thought he'd cracked it with a flashy camera with which he took several photos which the camera then stitched together into one image.  Unfortunately, that one image was the same size as each of the individual ones, so it was too small to enlarge to the size of the wall-hanging.

In the end, my daughter brought the paper wall-hanging to my workshop, where we had room to lay it out.  She then stood on a chair and took photos with her dslr camera of each section.  Ideally, she would have had a tripod to hold the camera level at the same height above each section of the picture, but we didn't have that and time was now running out.  So she just snapped away till we had images which would fit together.  The sun kept going in and out, so some of the photos were darker than others, but we plodded on regardless! 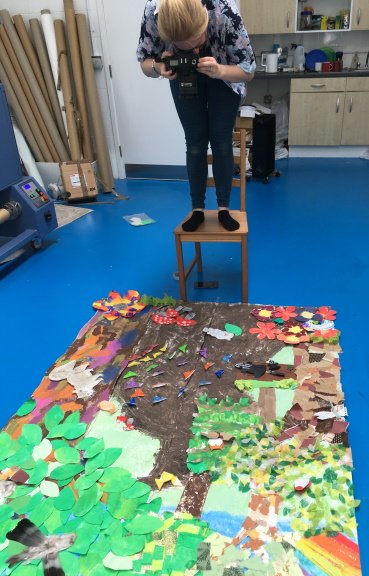 We then stitched the photos together in paint.net and printed the wall-hanging onto half panama fabric approximately 120cms wide by 2m tall.

Although here was quite a bit of work involved, the actual cost, when divided by the children leaving, was not very much.  And the wall-hanging was created by the children themselves, which makes it very special.

The nursery staff were delighted with the addition to their scenic backgrounds!